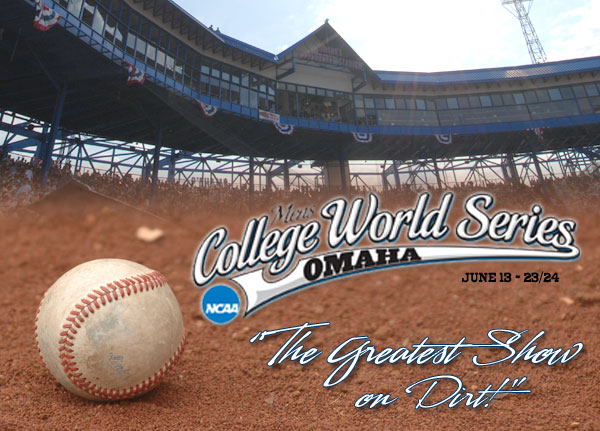 The College World Series is the final part of the NCAA Men’s Baseball Division 1 post-season championship. It is held in mid-to-late June in Omaha, Nebraska.

The first ever College World Series was held in Kalamazoo, Michigan in 1947. The University of California beat Yale to take the inaugural title. In 1950, after a brief stop in Wichita, Kansas, the CWS moved to Omaha and has been there since.

Thanks to an agreement with the NCAA that would keep the CWS in Omaha for at least 25 more years the city built the TD Ameritrade Park, a modern facility with seating up to 35,000, to host the event. During the 2013 CWS a record 27,127 fans packed the stadium to watch Mississippi State play UCLA in one of the best-of-three final games.

Before a team reaches the eight team College World Series they have to make their way through the 64 team NCAA Division 1 Baseball Championship. The selection for the tournament is much like the more famous NCAA Division 1 Basketball Championship with the 30 division 1 conference tournament winners getting automatic bids and then 34 teams getting at large bids based on factors such as record, strength of schedule, recent play and injuries.

The first round of the tournament, which is called the regionals, is divided into 16 regional pods. One of the four teams in the pod is selected to host the round-robin regional action at their home stadium. The selected host teams are essentially the top 16 seeds in the tournament. 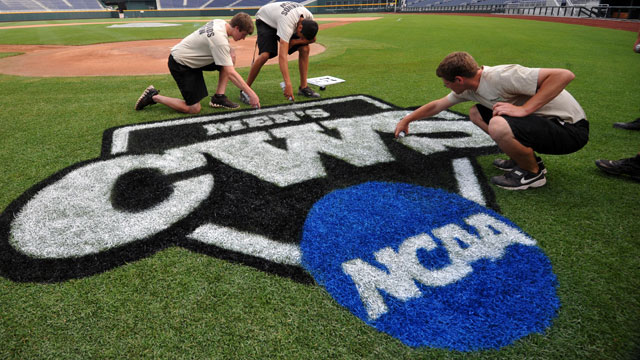 Eight of those teams are also given an official national seed. This means they are guaranteed to host the next round, which features the winners of each regional pod competing in eight best-of-three super regionals. If there is a super regional without a national seed the competing teams bid for the right to host the best-of-three and the NCAA awards the series based on the teams’ records and their ability to draw fans.

The eight super regional winners will then go to Omaha for the College World Series.

The College World Series is divided into two unseeded groups of four. The pods play double elimination until there is one team left each group. The two remaining teams face each other in a best-of-three series to determine the national champion.

The University of Texas has the most College World Series appearances with 34. Next on the appearance list are Miami, (Fl.) (23) Arizona State (22), Florida State (21) and Southern California (21.)

Southern California tops the titles chart with 12. The University of Texas and Louisiana State University have six, Arizona State has five and Miami (Fl.), Arizona and Cal State Fullerton have four.

There have been six back-to-back title winners, South Carolina, Oregon State, LSU, Stanford, Southern California (who won five straight between 1970 and 1974) and Texas. Florida State has the most College World Series appearances without a title.