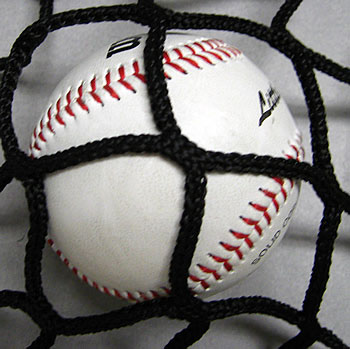 A baseball can be a dangerous thing. They sometimes break windows and eye sockets. And since this damage can happen during a baseball game, think of all the destruction baseballs can cause during practice, when multiple balls being used in multiple drills are flying all over the place

Luckily, we have baseball nets. During baseball drills baseball nets preserve windows and eye sockets and also keep all those baseballs close so practice can be a time to learn new skills instead of combing the area for wayward balls.

Here is a list of four different types of baseball nets that can make any baseball practice safer and more efficient. You should be able to find these products on the websites of eRetailers such as Amazon or Dicks, or at your local sporting goods store.

Bownet Baseball/Softball Big Mouth Portable Net $150 to $200
Weighing in at only 13 pounds, this may the gold standard of portable but effective baseball nets. Its rigid fiberglass and steel poles and super-strong netting allows ball after to ball to be pounded into it at close range, whether off of a bat or from the arm of a fireballing pitcher. The “mouth” feature of the net takes up more than half of the total area and will capture most balls hit into it. The Bownet Big Mouth requires no screws, snaps or tools for assembly, and those who have purchased it confirm it only takes about two minutes to set up. There are some complaints about its ability to function in very windy conditions, but other than that this product gets extremely high ratings.

Franklin Sports MLB Deluxe Infinite Angle Return Trainer $80
Some baseball nets aren’t just about catching balls. They are also about bouncing them back. The Franklin Sports MLB Deluxe Infinite Angle Return Trainer’s tubular steel construction and reinforced bungee net adjustment system will fire either pop ups, line drives or ground balls back to whomever throws them at it. The product features a heavy duty 30-ply net that is designed for all weather and a demarcated strike zone target. The MLB Deluxe a has simple two fold set up design which makes for easy assembly and storage. It will also work for lacrosse. 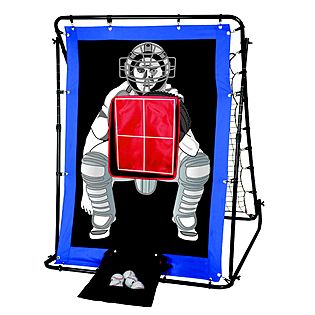 SKLZ Quickster Net – Portable Quick Assembly Multi-Sport Net $150
Even better than just a baseball net is a multi-sport net that can be used for drills and practice whatever the sporting season. The SKLZ Quickster Net has all of the qualities of a great baseball net: durable easy to assemble design; a mouth that captures balls; and a movable pitching target. But it is also specially designed so it works for practicing football, softball, lacrosse and soccer. With strong ply-netting that can withstand year-round use, this product may well be the first step toward making your burgeoning athlete the next Bo Jackson. 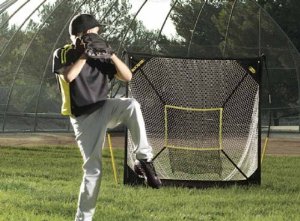 ATEC Pro Pitcher’s Practice Screen with Stand $150
This pitcher’s oriented practice net will have a young hurler moving the ball around the strike zone with the accuracy of a Cliff Lee. That’s because the screen features six highly visible targets around the corners of the strike zone for the pitcher to aim at. The ATEC Practice Screen With Stand also has a built in ball collector that will swope up any pitch that hits the strike zone. (More incentive to be accurate.) This easy to assemble product comes with a stand but can also be set up without one. Its heavy duty tarpaulin is double stitched for long-life and when the screen isn’t being used for pitching practice it is very effective as a portable backstop for hitting. The Practice Screen gets high marks from those who bought it on both ease of assembly and effectiveness. 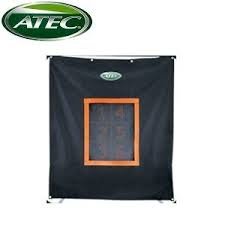