Just like a painter needs a brush, a hitter needs a bat. We’ve scoured the internet for the most highly rated bats in the youth, adult and softball categories. Below are descriptions of the bats as well as the price range you should expect the bat to go for. These bats can all be purchased from sporting good stores and online retailers.

Louisville Slugger also produces a line of wood bats for youth baseball that has long been very popular. The bats are made from maple, rather than ash, which makes them less prone to cracking or flaking, thus more cost effective. They are available between 26 and 31 inches and can either be cupped or not cupped. The Major League logo on the bat will make any youngster feel just like a Big Leaguer.

Easton LX73 Reflex -13 Youth Baseball Bat $36 to $60
If you want to go the alloy bat route for your youngster, the Easton LX73 Reflex is a popular choice. It’s made out of 7050 aircraft alloy and features an extremely light weight-to-length ratio. In fact, it can be purchased in sizes such as 29 inches 16 ounces or 31 inches 18 ounces, which are perfect for the under ten set. Some complain about the LX73 ability to generate bat speed, but for an eight year old learning how to hit that’s not really paramount. This bat is made to act as a stepping stone to bigger things.

Easton Youth Yb13S1 S1 Composite-12 Baseball Bat $200 to $250
As you can see from the price, the Easton Youth Yb13S1 S1 is a serious bat. What differentiates it from cheaper youth bats is the science behind it. The hitting stick features patented two-piece ConneXion technology for maximized energy transfer and a composite barrel with an extended sweet spot. The end result is laser quick bat speeds at 29 inches 17 ounces. Yes, this is a lot to pay for a Little League bat, but with greater bat speed those medium ground balls your ten year old was hitting could well turn into doubles in the gap.

Louisville Slugger 2010 TPX Tee Ball Omaha Baseball Bat $20 to $35
A tee ball bat should be short with a nice wide barrel to help the little ones make contact. And that’s what’s going on with the Louisville Slugger 2010 TPX Omaha bat, which comes in 24 inch 13 ounces and 25 inch 14 ounce size. The bat features extended barrel with a rolled end and a standard .875 inch handle with a high-tack synthetic grip. It also comes with a one-year warranty, which is just about enough time for your little one to graduate from tee ball to coach pitch.

Combat Youth Tee Ball Bat $35 to $45
With its wide barrel and explosive colors, the Combat Youth Tee Ball Bat certainly looks good. But beyond its bat rack appeal it packs a real punch, thanks to a hollow core which minimizes the bats weight while maximizing its trampoline effect. The bat is offered in sizes between 25 and 27 inches and 11 and 14 ounces and features a 14 ounces drop. It’s a virtual guarantee that if one kid on the tee ball team gets this bat everyone will want it, thanks to its cool look. And thanks to its cool performance, that would be a pretty strong team.

DeMarini Voodoo -3 Adult Baseball Bat with a 2 5/8-Inch Barrel $150 to $300
The advantage of synthetic bats is that they can play around with the design and create larger sweet spots. The DeMarini Voodoo promises an expanded sweet spot, while still being BBCOR approved — meaning it can be used in high school and college games. DeMarini believes their alloy bat has a distinct advantage over aluminum bats, due to its weight distribution, and that they have created a synthetic bat that limits vibrations. It’s a costly piece of equipment, but most of those who have purchased it seem to have thought it was worth the price.

Easton BK6 Hammer Bbcor Adult Baseball Bat $25 to $40
You don’t have to break the bank to buy a BBCOR approved adult baseball bat. The Easton BK6 is a perfectly acceptable hitting stick that will leave you with some cash for batting gloves or batting lessons. Easton’s patent pending Brace Barrel technology results low moment of inertia rate, which can make a bat feel up to 2 ounces lighter than it really is. When you step into the batter’s box with this hitting hammer you will have the comfort and confidence of a bat three times the cost.

Louisville Slugger MLB180 Natural Wood Baseball Bat $20 to $45
While it’s true alloy and composite bats are all the rage with the adult baseball set, there is still a place for the traditionalist who don’t think “ping” should be a sound associated with baseball. For those diehards, a classic bat like the Louisville MLB180 Natural Wood bat should be a fit. Made from pro-grade ash, which is the strongest wood available, the barrel of the bat is forged in a way that allows it to bend rather than break, creating a larger sweet spot. And no annoying metallic clank.

Combat Portent Adult Baseball Bat $300 to $400
When picking a bat, you want to look for a lightweight swing and large sweet spot. According to the promotional material for the Combat Portent Adult Baseball Bat, it offers the lightest swing weight and largest sweet spot available. This is achieved by the bat’s handle flex and a barrel trampoline feature plus a -3 drop. The bat is available in 31 to 34 inches and 28 to 31 ounces. If you desire a high performing bat the Combat Portent might be just the perfect thing to take into your hardball warzone.

Cold Steel Brooklyn Crusher $25-$40
Cold Steel’s goal with their Brooklyn Crusher model bat is to create a hitting tool that is truly indestructible. Most who have purchased the bat agree that this durable polypropylene bat won’t in any way crack, rot or break.

While the 29 inch 33 ounce bat is effective in competition or batting practice, it is also weighted in a way that is beneficial for home security. So not only will the Brooklyn Crusher help you dominate your beer league games, but it just might be the perfect tool to protect your family’s home or car.

Worth SBRLDA-34 ASA Slowpitch Softball Bat $35 to $40
Do you want a relatively high performance slowpitch bat that will leave you with enough money to buy a case of post game beer? Well, the Worth SBRLDA-34 ASA aluminum slowpitch bat might be the choice for you. It’s not quite of tournament quality, but it’s extended sweet spot will allow you to be a consistent performer in the your casual to competitive weekend leagues. It is approved by all softball associations and is 34 inches long and 27.5 ounces. Many satisfied customers will say that Worth is worth it.

Wilson DeMarini 34″ Bruiser Slow Pitch Softball Bat $60 to $100
Although alloy rather than composite, many uses report the Wilson DeMarini 34 inch bruisers hits like a synthetic double walled bat. Maybe its the DX1 aluminum alloy, which promises the “perfect balance” of strength and toughness. Maybe it’s the M2N end cap, is designed to absorb vibration. Like most slow pitch bats, this ASA and ISA approved stick takes about 50 or so hits to break in, but once you are there you will have a mid-range priced bat that gets close to high end performance.

DeMarini The Stadium Slowpitch Softball Bat $250 to $300
Featuring DeMarini’s strongest ever alloy, The Stadium Slowpitch Softball Bat is meant to bring out the power hitter in you. Its concave design gives the bat the kind of stiffness that will generate speed off of a slowly pitched ball, and its hybrid two piece gripe system makes you one with your hitting tool. Upon purchases, many of this bats users report hitting their first home runs. The downside is the bat seems to take a while to break in. But that’s what practice is for. And practice is even more fun when you are driving it out of the park.

Easton SK60B Typhoon (-10) fastpitch Softball Bat $20 to $60
Economical and efficient, the Easton Typhoon is a balanced bottle bat with a forged end concave cap. It’s 31 inches long and ASA certified. While the size of the bat may be a little intimidating to pre-teen players, users report it works well for a ten year old girl and will deliver a surprising amount of power. It comes highly recommended for rec leagues, and the success your daughter will have with the Typhoon will likely propel her on a trajectory of softball excellence. (Which will probably include more expensive bats.) 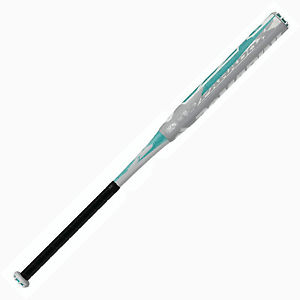 Demarini WTDXCFS CF5-11 Fastpitch Softball Bat 2013 $200 — $300
The Demarini CF5-11 fastpitch bat is a serious piece of equipment for the serious softball player. It is made from a cutting edge composite and features a two piece hitting system that expands the sweet spot and turns balls a hitter didn’t quite square into line drives. It also has a clutch end cap, which double harnesses the power of contact. The bat is available in size 29-inch, 18-ounce to size 33-inch to 22-ounce, so this model will work for the competitive high school girls player, or the men’s league masher.