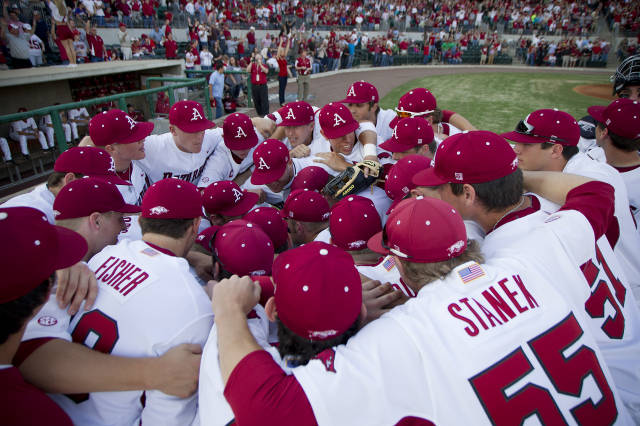 The University of Arkansas has been playing baseball on the collegiate level since 1923. They are in West Division of the Southeastern Conference. Their team nickname is the Razorbacks (although they are also referred to as the Diamond Hogs) and their team colors are cardinal and white. Arkansas’ home stadium is Baum Stadium at George Cole Field in Fayetteville, Arkansas. The facility seats 10,377 and year after year Arkansas ranks among the top few college baseball programs in attendance.

Arkansas Razorbacks Baseball has made seven College World Series 25 NCAA Championship Tournaments and have won four conference championships. They have been coached by Dave Van Horn since 2003.

While Arkansas first fielded a baseball team in 1897 they started competing regularly in 1923 and 1947 is considered the start of Razorback’s baseball’s modern era. Arkansas wasn’t very competitive during the ’50s and ’60s and played in front of tiny crowds in a run-down off-campus facility.

However that all changed in 1970 when Norm Debriyn was hired as head coach. He immediately took his team to a winning record and made the program’s first NCAA Tournament in his third year. With increased interest in Razorback Baseball the team was able to move into proper stadium in 1975. 1979 was the coming out party for Razorback baseball as they won their first Southwest Conference Championship and made their first College Baseball World Series. Led by freshman and future Major League Baseball star Kevin McReynolds Arkansas went all the way to the final game of the season, losing a 2-1 squeaker to Cal-State Fullerton.

DeBriyn would coach until 2002, with Arkansas winning two more conference championships and making three more College World Series during his reign. But perhaps even more importantly in 1996 the Razorback’s moved into Baum Stadium, which is considered by many to be the best college baseball facility in the nation.

DeBriyn was replaced by Dave Van Horn, who had just come off of guiding the University of Nebraska to back-to-back College World Series appearances. Although Van Horn and Arkansas were now competing in the tougher SEC Van Horn has able to pick up where DeBriyn left off and led Arkansas to a conference title and a CWS birth in his second season. The Diamond Hogs would return to the CWS in 2009 and 2012, finishing in third place both times.

The signature of the Arkansas Razorback Baseball is Baum Stadium at George Cole Field, which features a 51’ by ‘76 foot scoreboard and retro-classic design. Thanks to expansions during the ‘00s the ballpark now seats over 10,000 and in 2007 Arkansas became the first college baseball program to average over 8,000 fans for a season. During that year they also set the record for a three game regular season series when close to 30,000 saw the Razorbacks take on LSU. The most fans ever at a game at Baum came on April 8, 2009 when 11,103 spectators crammed in to see Arkansas defeat Arizona State. In 2013, Arkansas averaged 8,335 per home game, good for second in the nation. Now if they can just get that elusive first National Championship. 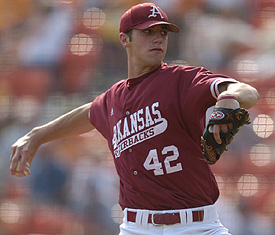